The Vulkanradweg in the Vogelsberg region of Hesse. 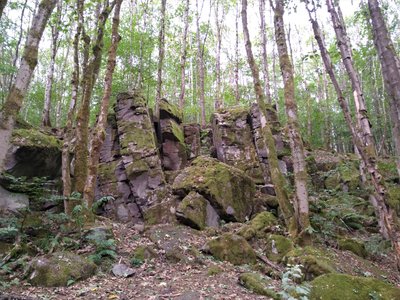 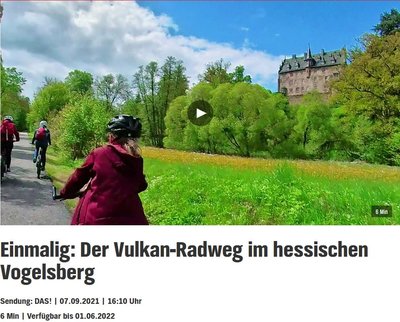 Colleagues of the Region Vogelsberg Touristik as well as the Tourist Center Lauterbach presented our volcanic region to the hr television with a bike tour on sections of the Vulkanradweg.

One stop of the group was the geotope and natural monument Uhuklippen near Ilbeshausen-Hochwaldhausen. The geotope of the year 2017 has a stately height of 10 meters. At the bottom of a steep step fitted into the slope, one finds a boulder scree. The cliffs present here are part of the older lavas - predominantly occurring in the eastern part of the Vogelsberg. Due to the position at the edge of this basalt deposit, one speaks here of an erosion edge.

The steeply standing, tectonically caused fissures offer a lot of room for imagination. Fascinating figures or faces can be discovered in the rock formations. Legends in typical Vogelsberg style also entwine around the rock cliff.

Well, you see the face?

The geotopes are freely accessible, they are located on the route of the Vulkanring as well as on the Geopfad.

Along the Vulkanradweg on the former railroad line of the Oberwaldbahn, the bike path winds its way through forests and meadows for just under 94km. From Lauterbach to Herbstein, from Hartmannshain to Gedern to Altenstadt - you can discover exciting volcanic landscapes everywhere. In addition, there are thrilling views for nature lovers. The Vulkan-Express makes it possible to reach and leave the region; it provides a lift for cyclists on weekends and public holidays.